I started to play saxophone in primary school, where I was selected by my school system to go to Tanglewood, Massachusetts during the summer season of the Boston Symphony Orchestra to participate in a Young Musician’s Academy. Early support in music from his friends and family in Massachusetts encouraged him to try his luck with Middle School Jazz Band where he began learning music theory and improvising on and off the stage. He bought an electric guitar and an had an excellent teacher; a graduate of The Berklee School of Music. His teacher, Joe Pulsifer, sat in with Aerosmith and encouraged him as he began writing his first songs.

He hauled his guitars and saxophones to Atlanta, Georgia in 1983 to attend Emory University where he was coached in Jazz Improvisation on his horn by legendary keyboardist Paul Mitchell. When he wasn’t fulfilling his scholarly duties at Emory he spent his free time working on his craft and by playing in Atlanta nightclubs. HIs drive earned him a summer of gigs on Sax and Harmonica with his college-friend (soon to be Grammy Winner) Amy Ray. One thing led to another and soon he was co-writing a song with Michelle Malone and cutting guitar, sax and vocal tracks on Michelle Malone’s debut rock album. Doing some touring in the Southeast with Michelle Malone and with Indigo Girls(for whom he wrote the Platinum-selling song “Thin Line”) in the late 1980s gave me an appetite to write songs and perform as a part-time job. Throughout the 90s he did this both as a solo artist and with regionally and nationally touring bands and musical theatre productions. In 2000 he began teaching at Sandy Spring’s Atlanta Country Day School as a Woodwinds and Strings teacher and director of the schools many concerts and theatre productions. Raising three wonderful children and making and sharing music are the miracles of my life.  He teaches Saxophones, Clarinet, Guitar, Uke, Mandolin, and Songwriting on Saturdays and Sundays. 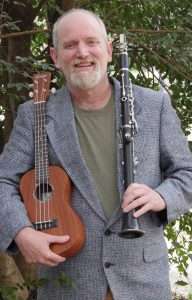